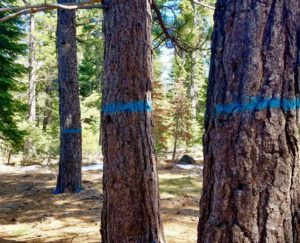 The USDA Forest Service created the Big Jack East Project to thin out 2,059 acres of trees surrounding the neighborhoods of Sierra Meadows, Ponderosa Palisades, Martis Camp, and Northstar Ski Resort.  When blue markings started to show up on the trees in those areas the residents immediately become concerned.

“The markings stem from the U.S. Forest Service’s Big Jack East Project, which calls for the thinning of trees in the area along Sawtooth Ridge in order to improve the health and resiliency of the forest, while also increasing the Forest Service and other fire agencies ability to protect neighboring homes.

The Forest Service began looking into the project in 2014, and held public comment on the issue in 2015. The department then released its preliminary environmental assessment last March, prompting an outcry from local residents.

“I have 38 years with the Forest Service in fire fuels and natural resource management,” said resident Kathy Murphy. “So I see thinning of the forest as a really important step toward fire hazard reduction and the design of that thinning is important.”

Under the Forest Service’s plan the roughly 1,883 acres designated as threat zone will be thinned and masticated. Murphy and other residences concern with the project resides in the Forest Service’s plan to use a highly site-specific method of thinning known as variable density thinning. The result of which is a heterogeneous environment that will include open spaces, and also some dense clusters of trees.

“What that really means is that we’re really trying to break up continuity. These naturally existing gaps are really important. We know from research and from looking at the past, these gaps, if placed across a large landscape, really mitigate and reduce the amount of fire and spread of fire,” said Vegetation Management Officer Mike Cartmill.

“They can also increase wildlife habitat and increase forest health. They allow openings to where more pine seedlings can germinate and propagate, where it’s less likely that the fir, which we don’t typically want as much here, will not propagate as much because there is so much light.”

Firs typically grow better in the shade, according to Cartmill, and present a risk because their branches often create a fuel ladders, allowing for flames to climb up the trees and reach their crowns.” Sierra Sun Justin Scacco

To read more about this project, click here.  To continue to be informed about the project, please feel free to reach out to Carmen Carr your Global Real Estate Advisor.