Home > Snowpack Improves in the Sierras thanks to a Miracle March 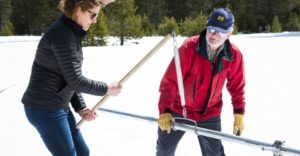 After a long winter with minimal amounts of snowfall, we were all happy to hear that a series of Atmospheric Rivers were going to be hitting the Sierra’s.  Miracle March made its debut, delivering feet of snow.  Even with Miracle March you can’t help but to be concerned with the overall snow totals.  Well the results are in and it looks good…March 2018 will go down as 4th largest snow total since 1980.

“The snowfall amount was confirmed Monday from measuring the snowpack with Jeff Anderson, hydrologist for the Natural Resources Conservation Services.

“So if you melt down all these inches of snow, you’d be standing in almost 3 feet of water,” Anderson said on a sunny spring day. “We definitely had a miracle March. Just last month, on March 1, the snowpack here at Mt. Rose was only 48 percent of the median peak, so it almost doubled in one month.”

The biggest recorded Miracle March was in 1995 with a snow water increase of 27.5 inches. That year there was a 60-70 percent increase.

Even with the increases in March, snowpacks across the Tahoe region and across the rest of Nevada still are slightly below average. But Anderson doesn’t seem to worried.

“This means we are going to see a lot more water coming down our rivers and into the lakes and what not, and that’s really great news. And not only did the Sierra see a pretty great bump in the snowpack, but also the rest of Nevada did too … it’s good news for all of Nevada,” said Anderson.

“The saving grace of this year is the snow from last year, which kept our reservoirs really high. And now we’re in a situation where the reservoirs are going to be great again for this summer.” Kelsie Longerbeam Nevada Appeal

All such great news for this upcoming Summer season.  The lakes will be full, and the rivers and steams will be running.  Which makes are region even more enjoyable.  Plan your next upcoming trip, and contact Carmen Carr for a list of current homes for sale in the Truckee/North Lake Tahoe region.